Home Flying Adventures Flying with Friends to The Pik-n-Pig

Flying with Friends to The Pik-n-Pig

One of the things you look forward to when you get your pilot’s license is flying somewhere to eat.  In my neck of the woods, it’s the Pik-n-Pig in Carthage, NC.  It’s one of the most talked about fly-in places around, and one that everyone looks forward to flying to for one of their cross country flights. This will be my first time to The Pig, as it’s affectionately known among my pilot friends.

It’s a beautiful early March day that has graced us with a warm 60 degrees and clear blue skies.  The winds are gusting to 14Kts at times, but it’s a wonderful break from the miserable cold, wet weather we’ve endured for weeks now.  We’re all excited to be flying today.  It’s been two months since I’ve been in a plane, and the guys haven’t been up in a month. We’re taking two planes and will be following each other to Carthage.

Carthage is 90 miles east of Charlotte.  Flying time with a nice tailwind should take us about 40 minutes to get there.  We’re cruising at 5500 feet and logging a 119Kt ground speed.

It’s a fantastic view, and I can’t believe I’m soaring with the birds again. It’s my first time in the right seat, and I’m loving every minute of it.  We are flying an Archer today.  It’s a little bigger and faster than the Cherokee but similar.

About three and a half miles out, I spot a plane leaving the runway from Gilliam-McConnell (5NC3) which is where the Pik-n-Pig is located.  It’s a private airfield but open to everyone.  It has a field elevation of 445’, runways are 13/31 and the field dimensions are 2538’ by 36’.  It’s actually smaller than the field we just left at Wilgrove but from the air, it looks larger.  I believe it’s because the trees aren’t in as close proximity to the runway as at Wilgrove.

Eric is flying in the command seat today, and he brings us in for a left downwind approach for runway 31. Chris and Ira are following in the Cherokee and are about 5 miles behind us. We’ve been in radio contact with them along the way. Eric brings us in for a nice landing as I grab some shots with the Canon on our approach.  It’s nice being able to get some great shots when you’re not the pilot in command.

The Pik-n-Pig sits about midway of the landing strip and there are multiple planes of various types lining the runway. There’s even an old warbird permanently parked near the entrance on display. Eric picks a spot between two Cessna’s and pulls the plane in to park gently.  We post flight and get out just in time to see Chris turning final on 31.  He makes a beautiful landing that I capture with the camera while standing on the wing of the Archer. The car lot is full too.  It must be good if it’s this popular. I can’t wait to try it.

The Pik-n-Pig is a much larger place than I imagined it would be.  There’s a covered patio with picnic tables where you can sit looking out at the runway while enjoying your food.  The smoke house sits outside and just to the left of the main building. It smells amazing.  I didn’t realize I was hungry until I got a whiff of smoke blowing across the field and now, I think my stomach grumbled to let me know it’s ready to try some of that BBQ.

The outside of the building looks like an old home and quaintly hung over the entrance is a hand painted sign that welcomes you to The Pik-n-Pig.  Once you walk through the red doorway, the entrance resembles as an old post office complete with the windows and signs above each one with post office purchase options listed above for added effect.  It’s warm, homey and smells incredible.

The multiple rooms are broken up like it might have been an old house. We’re seated in the main dining room near the window.  It has a great view of the runway, which is wonderfully distracting and makes for some fun conversations.  Lunch and a view, how awesome is that?

The place is bustling inside and out.  It’s decorated in airplane paraphernalia of course, with propellers gracing the walls, blue runway lights mounted near the bar, small model planes hanging from the ceiling and several funny flying pig references on the walls around us. It’s rustic and warm and there’s laughter and conversation coming from all directions.  The low rumbles coming from other tables I hear speak of aircraft’s, flying and food.  It’s a perfect spot to mingle with pilots from all over and get your fill of great food and friendly conversations.

The staff is local and friendly.  The service was fantastic and quick even though it was crowded.  However, I wasn’t really paying attention to the time as we were thoroughly engulfed at our table talking about planes, engines, fly-ins and passing around pictures from our phones.  In fact, I think we would have gladly continued our conversations if the food hadn’t arrived as quickly as it did. 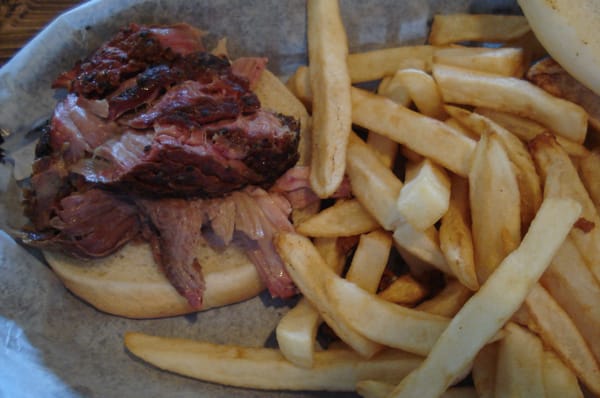 Once the food was placed in front of us, we all got very quiet for a while, with the exception of few umms and grunts as we worked our way through an incredible meal.  I got the pulled pork plate with baked beans, coleslaw and hush puppies.  It was exceptionally moist, pink on the inside, with a nice smoke crust on the outside.  It has great color and the taste is as amazing as it smells.  I’ve eaten quite a bit of BBQ around North Carolina over the years, and I’d put money on this being one of the best I’ve put in my mouth!

The Pik-n-Pig has stood up to its reputation and I’m very impressed.  Half the fun is just getting here because we flew!  The other half of the fun is visiting with friends, talking about flying and eating some great food.  It’s worth your time to get to Carthage and check it out.  It’s off the beaten path, but aren’t those some of the best places to find?

John and his Grumman departing

We hung out for a long time after we finished eating, just watching planes come and go, laughing at some hard landings, admiring some beautiful planes and wishing we could do this more often.

We finally decided to load up again and make our way back home to Wilgrove.  It was a beautiful flight back as we chased the sun across the sky.  We landed well before sunset but it was sinking quickly as we parked the Archer and got her settled back in for the evening. It was a fun trip with friends, good food and of course, flying.

You can check them out here:  http://www.pik-n-pig.com/